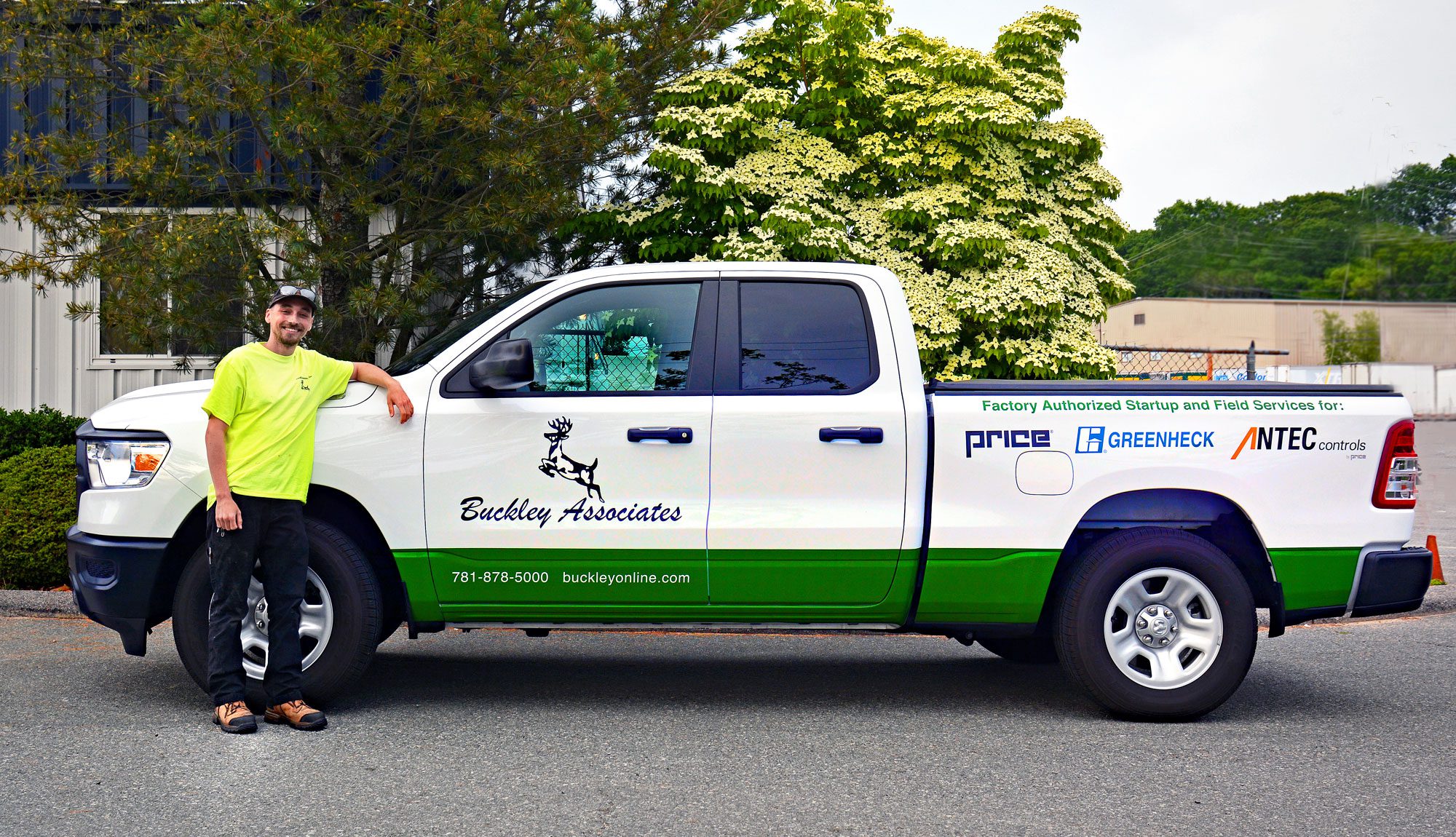 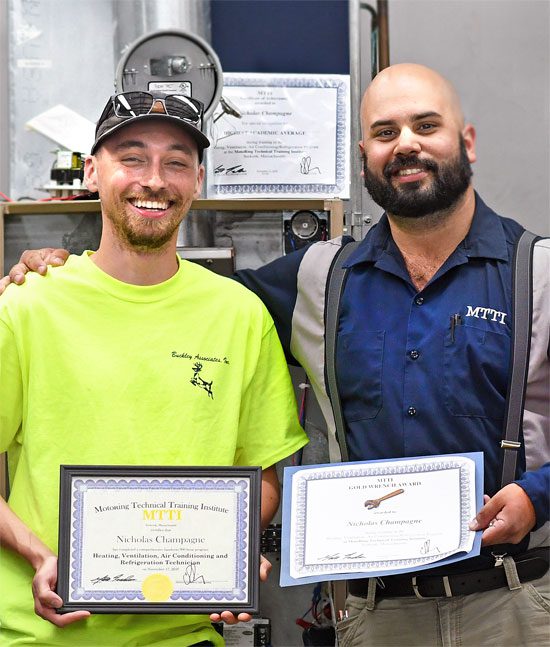 Graduating from high school, I didn’t know what I wanted to do.

I knew I didn’t want to take on large loans to go to college. I wondered if I would do well in the trades. I also thought about a career in IT.

I was hired as a network engineer right out of high school.

For about a month, I worked with my cousin’s partner, who owns an HVAC company. Knowing that I was good with computers, he connected me with his friend, whose IT company he services. Happy at first that I had good career, I realized three months into it that I can’t sit behind a desk all day. Staring at a screen for hours makes me antsy; I need to keep moving.

I took a job at Shaw’s Market, where I had worked part-time during high school.

Working my way up to full-time manager, I found there was little hope for further advancement. Shaw’s is a unionized company; people in upper management hold their positions for a long time—30 or 40 years. After 4 years of working insane hours and jockeying for position, I decided my future wasn’t in retail. Thinking I might want to become a police officer, I started training while working second shift at Shaw’s.

I kept thinking about HVAC.

Part of why I had been pursuing careers in everything but HVAC is the personal hurdle I faced. I have a color vision deficiency. I can distinguish red from green, but may not be able to tell blue from purple. I had to come to terms with what I wanted to do.

I asked myself, what is a hands-on trade that is highly regarded?

HVAC brings together everything I wanted in a career. Working at Shaw’s was ‘all brawn’; my short IT career was ‘all brain’. I wanted to work at something using my brain, while working with my hands. Was I going to hide behind my “color blindness” or give HVAC a try?

I entered the HVAC industry backwards; I was hired as I was starting school.

I went back to work with my cousin’s partner, who owns the HVAC company. I told him that I wasn’t ‘feeling myself out anymore’; this was the work I really wanted to do. Just to be sure, I assisted him on a few jobs. When he offered me a paid position, I gave Shaw’s notice. Coincidentally, I started working in HVAC on the same day in July 2019, on which I began training part-time in MTTI’s evening HVAC/R program.

I looked at other trade schools, but never heard anything positive from people who attended them. The HVAC/R class had already started when I met with Anya, the Admissions Representative. I was the last person to join the class during the drop-in period. I had missed most of electrical, so I had to make that up. Fortunately, I had learned a little in the field. I always ask a lot of questions, and when I’m taught something once, it sticks. With support from my instructors, I was able to catch up with the class.

I chose to attend MTTI over attending school for free.

HVAC apprentices need educational hours to apply for a Journeyman’s license. The owner of the HVAC company offered: “I can put you through a state school to get your hours.” There would have been no cost for me. I thanked him, but explained that I was completely new to HVAC. Working in retail and IT, I wasn’t coming into the trade from a hands-on background. And I didn’t want to sit in lectures in a state school classroom at night, after working all day. I preferred to learn hands-on in MTTI’s HVAC/R program.

For a year-and-a-half, I lived and breathed HVAC.

I think that going to school at night, while working in the HVAC field during the day, is the best way to go. Going to school part-time takes a little longer. But what you see on the job during the day, you learn more about in class at night. One classmate and I began working in HVAC before starting school; most of the others were hired into HVAC/R positions even before the program completed.

Only a few months in school, an instructor offered me a position where he worked.

Having taken a pay cut from being a manager at Shaw’s to apprentice in HVAC, it was in my best interest to make the move. I worked at Superior Comfort for over a year; it was a great learning experience. Superior Comfort provides cutting-edge residential HVAC service. I gained experience in diverse areas, including geothermal energy and mini-splits. Working alongside Jared who is a really good installer, he became my best friend.

I was becoming good at installation, but it wasn’t exactly where I wanted to be.

During the summer of 2020 I went back to work with Adam. He’s the guy I originally worked with at Superior Comfort. Adam is the guy they call for any problem—but it was still doing installation. Working with Adam, taking into account the issues and the calls he faced, I recognized that service was the right career path for me. I wanted to troubleshoot—be the go-to-guy that knows how to solve problems. I wanted to use my brain.

While still in school, I was offered a new opportunity I couldn’t pass up.

My instructor, Matt, saw that Buckley Associates in Massachusetts was hiring. Matt had worked for Buckley Associates in the past; he let me know they were looking for a guy. “What they do might be right up your alley.” When I talked with the Lead Tech, Mike; it went well. He gave me the Service Manager’s number. A month later I was hired, just as I was completing the program at MTTI.

At Buckley Associates, I have become ‘the guy to go to’—a specialist.

Buckley sells mostly high-end products to mechanical contractors. I am a factory representative for gas detection systems, such as those used to monitor carbon monoxide (CO) emissions in parking garages. I help companies get their systems up and running on behalf of the manufacturer, for example starting up a Greenheck dedicated outdoor air system. Greenheck is a leading supplier of air movement, air control and air conditioning equipment for commercial and industrial applications. Their equipment is installed in large facilities—hotels, where the lobby, meeting rooms and guest rooms need continuous fresh air circulation—and cancer research centers that need clean and efficient ventilation.

My job is to know everything about the products I represent.

I’m there to ensure that the manufacturer’s products are installed and operating correctly. Companies require and need a start-up report from the factory representative. I also service components that need to be repaired. For example, if a motor that is under the factory warranty is bad, we have to fix it. Fixing factory equipment is different from a typical HVAC service call. The units we repair are so high tech that facilities in which they are installed need our specialized knowledge. More often than not, when troubleshooting and repairing the equipment, I need to think outside of the box. 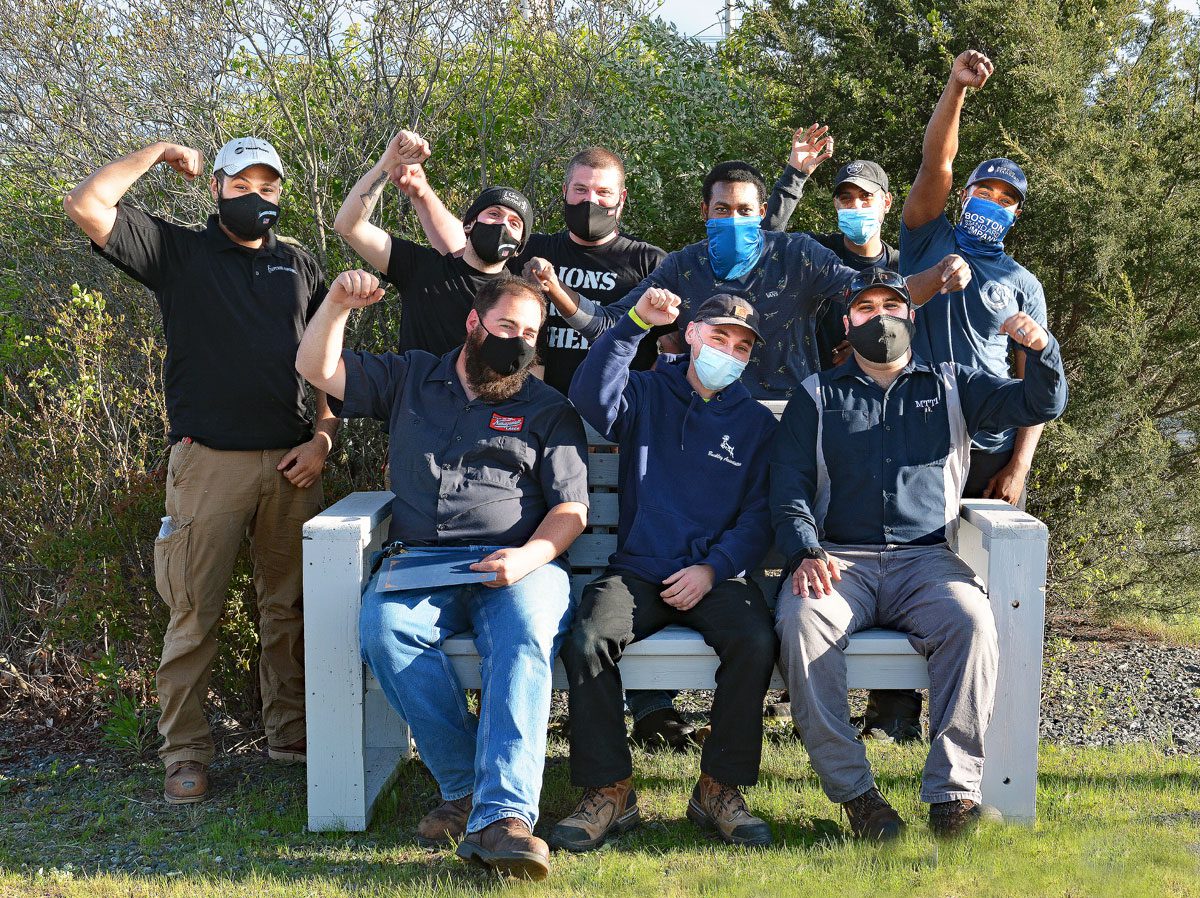 If you want to get into a trade, MTTI is the perfect opportunity.

I haven’t been the best student in the past. I thrived in MTTI’s hands-on program taught by experienced instructors. When I come across an issue now at work, I take the steps Matt taught me—especially knowing where to begin. If I hadn’t attended school at MTTI, I wouldn’t even know where to start.

Attending MTTI’s HVACR program was well worth the money.

I have no regrets. I learned HVAC fundamentals and got a good grounding in the basics. It would have taken 10X longer learning in the field, compared to going to school. I got the job opportunity at Superior Comfort because my MTTI instructor recommended me. Matt, my other instructor, referred me to Buckley Associates, where I now work. As a graduate, Matt has become my colleague and friend. I made a bunch of friends who were my classmates at MTTI—and met my best friend while working at Superior Comfort.

Only a few years out of high school, I have a career path in commercial HVAC.

I love doing service and I’m good at it. I’m very happy working for Buckley Associates—and there is opportunity for growth within the company. After trying out careers in retail and IT—even starting training to become a police officer—I’ve found the right field for me. I can see myself doing this for a really long time.

This website uses cookies to improve your experience while you navigate through the website. Out of these, the cookies that are categorized as necessary are stored on your browser as they are essential for the working of basic functionalities of the website. We also use third-party cookies that help us analyze and understand how you use this website. These cookies will be stored in your browser only with your consent. You also have the option to opt-out of these cookies. But opting out of some of these cookies may affect your browsing experience.
Necessary Always Enabled
Necessary cookies are absolutely essential for the website to function properly. These cookies ensure basic functionalities and security features of the website, anonymously.
Functional
Functional cookies help to perform certain functionalities like sharing the content of the website on social media platforms, collect feedbacks, and other third-party features.
Performance
Performance cookies are used to understand and analyze the key performance indexes of the website which helps in delivering a better user experience for the visitors.
Analytics
Analytical cookies are used to understand how visitors interact with the website. These cookies help provide information on metrics the number of visitors, bounce rate, traffic source, etc.
Advertisement
Advertisement cookies are used to provide visitors with relevant ads and marketing campaigns. These cookies track visitors across websites and collect information to provide customized ads.
Others
Other uncategorized cookies are those that are being analyzed and have not been classified into a category as yet.
SAVE & ACCEPT