About Us > Our History

MTTI is a bridge between employers with jobs to fill due to a skills shortage and the underemployed individual.

MTTI was founded in 1985 as a workforce development program

Ward and Sharon identified a skills shortage in a career field and worked closely with business and industry to find out the entry-level skills they wanted in people they would hire.  The employers drove the development of the curriculum and shops were established with the same tools and equipment that you would find in that industry.  Through this re-creation of the workplace and hiring of experienced teachers, students were properly trained to enter the workforce.

In 1993, MTTI received approval to operate as a post-secondary career and technical school from the RI Board of Governors for Higher Education.  In 1995, the school was awarded accreditation by the Accrediting Commission of Career Schools and Colleges (ACCSC) and was approved by the United States Department of Education for Title IV Financial Aid Programs.

About Ward and Sharon

Ward was first employed as a Motorcycle Technician in 1967.  He achieved expert ranking as a motorcycle Moto crosser, Dirt-Tracker and Road Racer during his technical career in the Boston and Providence area.

He left the Boston area to manage a dealership’s service department in Central Connecticut.  At the same time a vocational instructor’s position opened up in Hartford, CT working with “troubled” inner city youth.  Ward worked both jobs for three years before applying for a job as a Technical Advisor and Test rider for a national motorcycle manufacturer. 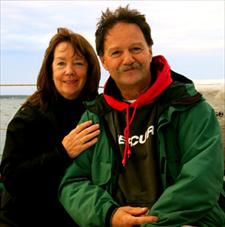 Ward was hired by this manufacturer and traveled extensively throughout the country, for over five years.  While working nationally, Ward taught multiple yearly update seminars.  He also instructed advanced specific courses relating to the brand at all four training facilities, one at each corner of the country.

Test riding included multiple yearly trips to Southern California for extensive testing of different motorcycle models.  He reported mainly to the Technical Service Department, Quality Research and the Testing Department as well as the Emissions Lab and sometimes the Legal Department.

In search of a more permanent base, Motoring Services was founded.  This machine shop and engine building facility in its early years won multiple championships in many phases of the sport.  New England Championships were won using “Motoring” engines in Moto-Cross, Short-track, Hill-climb and Roadracing.  Ward was the Crew Chief and Builder of three National Championship winning Motorcycle Endurance Road Racing Teams, races that ran between four and twenty-four hours in length.  Ward has three overall wins in twenty-four hour races, setting a mileage record in one.

It was during this time that there was a skills shortage and a need for trained mechanics in the Northeast became evident.  Local dealers were continually expressing this need to Ward and with his extensive technical and teaching background he was a logical choice to develop a program.  Ward had just married Sharon, who had worked for the Division of Job Development and Training for ten years as the Chief of Client Services. This was an agency that developed career training programs to help unemployed people gain skills to meet the labor demands. Sharon supervised a statewide service delivery system consisting of eight career centers that helped unemployed workers find skills training to enter new careers. With Ward’s technical abilities and Sharon’s knowledge of career training, MTTI was formed.

Together they developed a proposal to train 10 youth to be motorcycle set-up and pre-delivery mechanics.  Ward over-enrolled  to serve 12 students, thinking some would drop, but 11 graduated and 11 were placed in training-related employment.  This program contract experienced a 110% job placement rate.

Ward and Sharon are happily married and have two children, Eddie and Ali. They have been managing the school together since 1993, when MTTI first received approval from the RI Board of Governors for Higher Education to operate as a post-secondary career and technical school. Their son, Eddie, joined the staff as an Admissions Representative; and is now the Director of Operations. Their daughter Ali began as a Career Services Specialist and is now MTTI’s Director of Student Services. Eddie and Ali will offer continuity to the mission of MTTI as the school moves forward in the future. MTTI offers a challenging and rewarding career opportunity where they can, together with an outstanding, dedicated staff, be part of a place that helps people change their lives.

This website uses cookies to improve your experience while you navigate through the website. Out of these, the cookies that are categorized as necessary are stored on your browser as they are essential for the working of basic functionalities of the website. We also use third-party cookies that help us analyze and understand how you use this website. These cookies will be stored in your browser only with your consent. You also have the option to opt-out of these cookies. But opting out of some of these cookies may affect your browsing experience.
Necessary Always Enabled
Necessary cookies are absolutely essential for the website to function properly. These cookies ensure basic functionalities and security features of the website, anonymously.
Functional
Functional cookies help to perform certain functionalities like sharing the content of the website on social media platforms, collect feedbacks, and other third-party features.
Performance
Performance cookies are used to understand and analyze the key performance indexes of the website which helps in delivering a better user experience for the visitors.
Analytics
Analytical cookies are used to understand how visitors interact with the website. These cookies help provide information on metrics the number of visitors, bounce rate, traffic source, etc.
Advertisement
Advertisement cookies are used to provide visitors with relevant ads and marketing campaigns. These cookies track visitors across websites and collect information to provide customized ads.
Others
Other uncategorized cookies are those that are being analyzed and have not been classified into a category as yet.
SAVE & ACCEPT