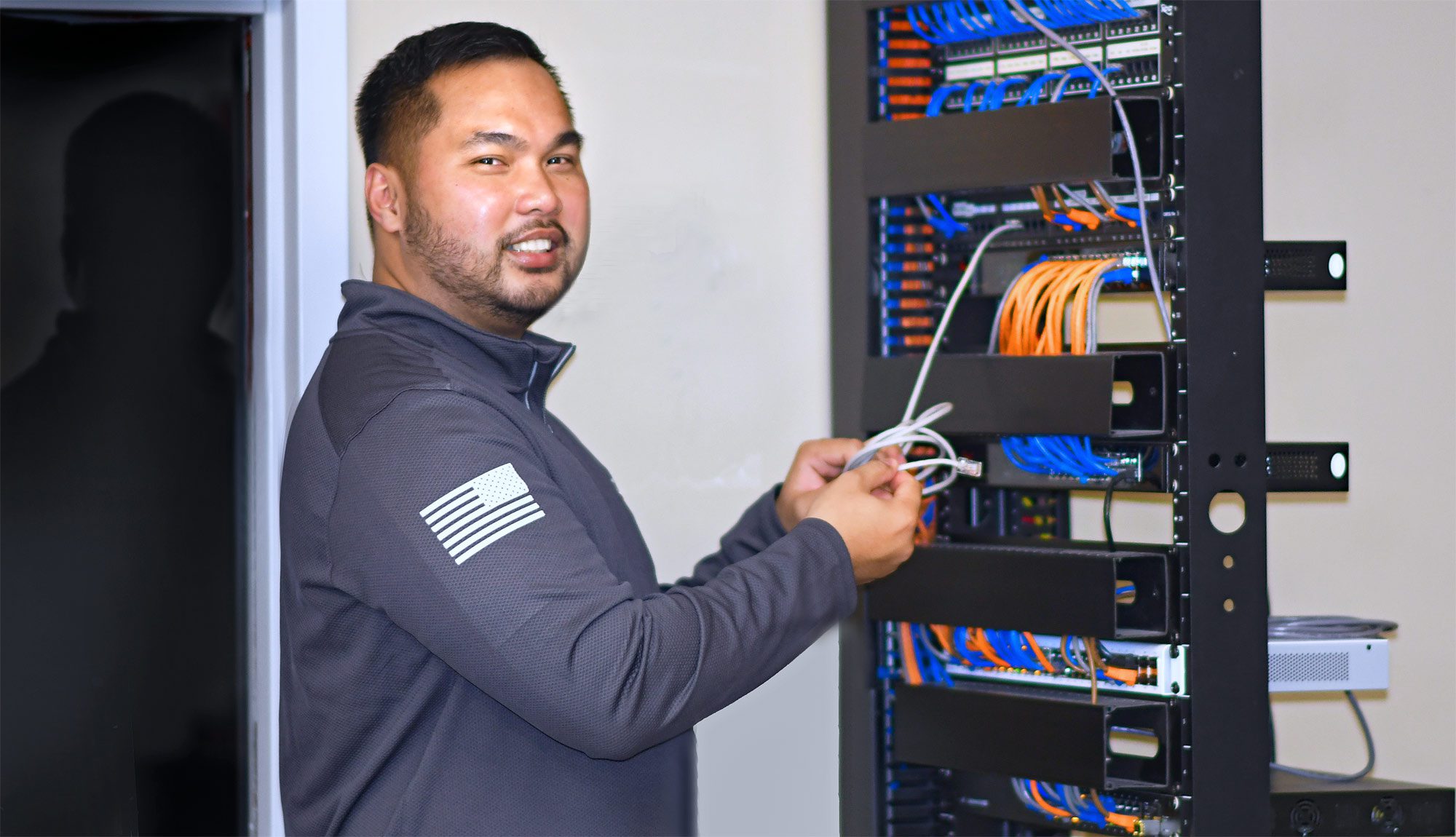 I came to the United States believing in the American Dream.

It may sound like a cliché, but coming from nothing, that dream has been a powerful motivator. Living in the Philippines, my family was poor. It’s hard to get a job. When you apply to one of the fast-food restaurant chains, they require a college degree and prior experience. At 18, turning 19, I left my mom and brother to move to the US.

Once in the US, a job was less about work I would enjoy and more about the money.

From Pawtucket, RI, I moved to Cape Cod to work as a line cook. Six months later, I got my first machine operator job at Cape Cod Potato Chips—that was fun. Moving back to Rhode Island a year later, I was hired at EMS Engineered Materials Solution. I always meant to do something better for myself; before I knew it, almost 11 years had passed. Coming home tired and annoyed at how repetitive my machine operator job was, my partner, Michael, asked, “Are you happy with where you are—with no opportunity to move up or grow?” I told him I wasn’t. 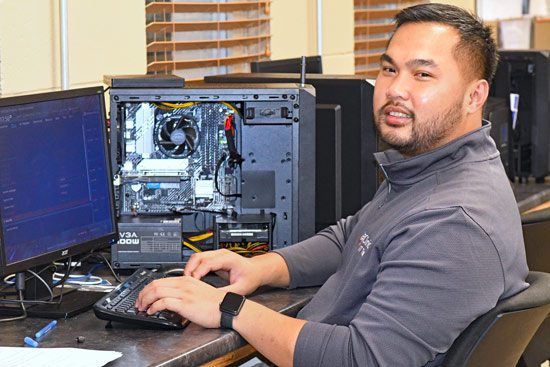 Thinking about training at MTTI, I was unsure which career path to choose.

My cousin had just graduated from MTTI’s Billing & Coding program; she sent me the link to the school’s website. I considered becoming an electrician, because they make good money. My partner’s sister pointed out that I was interested in computers: “You always have electronic gadgets around.”

Stunned, I thought, ‘Why didn’t I think of that?’

I’m always carrying an iPad and doing something with computers. Cheryl in Admissions toured me through MTTI’s computer lab. I saw Ken teaching his students. I looked at them, and I looked at Ken, and thought, ‘I can see myself doing this.’

Ken made us look forward to each day.

Orientation was fun; but the second day, when we began building a computer, was a blast. Ken outlined what we would cover throughout the program. I was relieved that I had picked the right course. Every day after that was something new.

Working 12 hours on the night shift, and in class 6 hours a day, I might have felt too tired to do this. But class was never boring or dull; it was so much fun, I often worked through breaks. I had built a computer before by copying someone on YouTube. I realized I had barely scratched the surface. I knew where to locate the CPU and motherboard; at school I learned how they work.

Everyone in my class was on the same team; it made the entire experience really great.

I met really good, hard-working people from a variety of backgrounds and who had different personalities. We became close and would chat and joke We had a little healthy competition with one another. We knew someone would come out on top—but we wanted everyone to pass the course. Most of us still stay in touch.

I thank Ken for patiently explaining everything—he made it easy to learn.

He never got angry when we made mistakes, even when I broke the computer I was building—three times. Instead, Ken was happy. He’d say, “Now you get to demo for the class what happened and how to fix it.”

Ken gave us many useful skills that I use now on the job.

He taught us how to set up a computer to auto update. We learned Active Directory / Domain Controller–how to create a user, and how to maneuver in Active Directory. Ken introduced us to Microsoft OS and Mac OS, and Office 365, which I use almost every day at work. He also trained us to use Google to troubleshoot error codes and identify which malware was causing a problem. We worked with both MACs and PC laptops—we even disassembled one. At eClinical, if I need to upgrade a component in a MAC or PC, I know how to do it.

Shawn in Career Services, really made the effort to help me find an internship.

I was terrible at interviewing—so nervous that I stuttered. Shawn, gave me tips about interviewing and helped me get my resumes out to companies, including eClinical. Impressed that the company had hired Richard Pina (2021) right out of the Computer Tech program, I thought I might be successful at eClinical, too. Richard mentored me throughout my internship—he continues to answer my questions, and help if I’m stuck on something.

The friendly atmosphere at eClinical makes me want to work even harder.

A pretty big company, I’m surprised at how it feels like a tight-knit family. My boss, Scott, is amazing. Everyone is so welcoming—joking with me like they’ve known me a long time. Recently I was keeping my birthday on the down low. Suddenly Richard pings me and takes me into Microsoft teams, which we use for internal chats. He says, “Happy birthday, buddy!” Then everyone threw me a birthday party!

I’m an IT Support Specialist at eClinical, but that’s not my end goal.

I’m in charge of imaging machines for new hires, creating their user accounts and troubleshooting when something is wrong with their laptops. I’ve passed my A+ certification. I want to achieve Network+ and Data+ Certifications, so I can branch into the analytics. My end goal would be cybersecurity. The Cybersecurity Specialist at eClinical tells me the sky’s the limit when you work in cybersecurity. 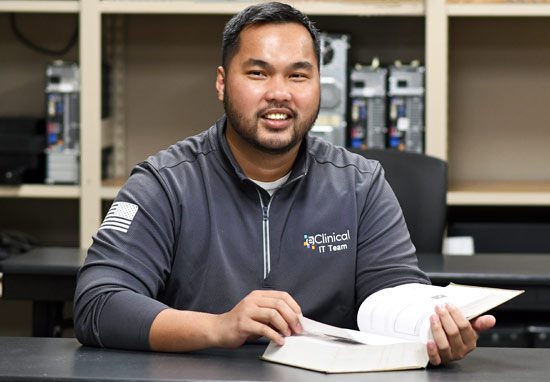 I came to the States dreaming of a better life.

Taking the first step to commit to school was the hardest part.

It’s easy to become comfortable doing one type of job for a long time. Venturing into something new, you start thinking about the “what ifs”. What if it doesn’t work out? What if I don’t like doing the actual job—will I be back at square one? I thank my partner, Michael for pushing me to take that first step!

Before attending MTTI, I was in a dead-end job—just a place where I clocked in and out to get a paycheck. Now on an 8-hour shift, I stay for an extra hour just because I like working there. If you’re considering short-term training with employment assistance, look at all the programs MTTI offers. When you find a program in an industry in which you can see yourself working for a long time, take that first step. You can always make money doing something you don’t like, but when you love what you do, it doesn’t even feel like work—you will be living your dream.