10 years ago the automotive industry was not welcoming to women. A medical career seemed to be more of a fit. But after 10 years of working as a Medical Assistant, Private Home Patient Care Assistant and a Lab Assistant, it became repetitive. I wanted a new challenge, in which every day would be different.

I like helping people—that’s why I stayed so long in the medical field.

People depend on help from medical providers to have good health. They also depend on their cars to drive to work or school, or to transport their family members. They need good technicians to keep their cars on the road.

I realized I can still contribute to society as an Auto Technician.

Every car is different; every engine is different. As a Technician, I’d be learning something new each day, while keeping my mind sharp—and helping people.

I made an appointment to visit MTTI and one other school.

The MTTI Admissions Rep, Cheryl, encouraged me: “Absolutely! Check out other schools—find out what you like before making a decision to enroll in a training program.”

The other school’s facility was beautiful.

Students attend for two years, and work on cut-away cars.  I thought to myself, ‘How does working on a shell of a car prepare you to work on cars in the real world?’ People drive cars in the heat and cold—and through mud and ice. You need to know what to do when bolts get rusty or break.

MTTI’s shop has 10 bays for servicing cars; students work on all different types of vehicles.

MTTI’s daytime program is seven months. The tuition is reasonable. Students can bring in their own cars, or cars of family and friends. Half of the day is in the classroom and half is learning hands-on in the shop—who wants to sit in a classroom all day?

Rich, who was my instructor, is a really good mechanic and teacher—and an awesome person.

He’s patient and positive every day; ready to share what he knows. We called him the ‘walking Google’—there isn’t any subject you can bring up that he doesn’t know something about. I only hope I can be half as good an Auto Technician as he is.

My own car had a problem that no one had been able to solve.

If I had asked someone to help me work on it, most people would have shaken their head ‘no’ and said, “That’s a lot of work.” Rich asked me “Are you willing to do the work?” I answered, ‘yes’.

With Rich’s help, I took apart my Mercedes R350’s engine and replaced the valve seals.

The engine had to be completely taken apart to make the repairs.  The labor charge in a shop would have been thousands of dollars. I paid only $30 in parts—and got a great education while doing it.

Finding an internship was a little tough.

Not everyone was as welcoming to me as a woman as I would have liked. Driving around, handing out my resume, I got some funny looks. Some men were skeptical about a woman’s ability to do the hard labor—and lift heavy things.

I chose a place that had a positive view of women techs; they were willing to give me a chance.

I worked on all types of vehicles, just like we did at school. Some of the commercial vans we serviced had large tires. At first the male techs would grab a tire to help me. I told them that I came expecting that some things would be heavy—I’m capable of doing the job. I reassured them, ‘If I need help, I’ll let you know.’

They wanted to hire me, but there wasn’t enough work.

I looked for another shop that had an open position. I offered to work one week for free, so they could decide whether they wanted to hire me. At the end of the week, they told me, “You’ve got the job, kid!”

You never know what will come through the door—a new car, an old car, an economy car or a luxury vehicle.

I’ve changed out a radiator, replaced spark plugs and installed new batteries. When customers see me working, they say, “You’ve got a woman in the shop—I want her to fix my car!” They’ll come right into the shop to talk with me about their cars’ problems.

I expected I wouldn’t immediately earn as much as in medical, where I have 10 years of experience.

I still work some hours in medical to support myself and my kids, while establishing myself as an auto tech. As technicians gain experience, they can earn a good living, and also make money on the side. Good auto technicians will always be in demand. Automotive Service is a trade you can’t lose.

The changing auto technology will be a great career opportunity.

When someone hits the button for a car to self-drive—and it fails—they will need a technician to diagnose and fix the problem. The change will be that Techs will need to use a computer. The basics I learned at MTTI about electrical / electronic systems and diagnostics gave me a foundation I can build on as new technology evolves. 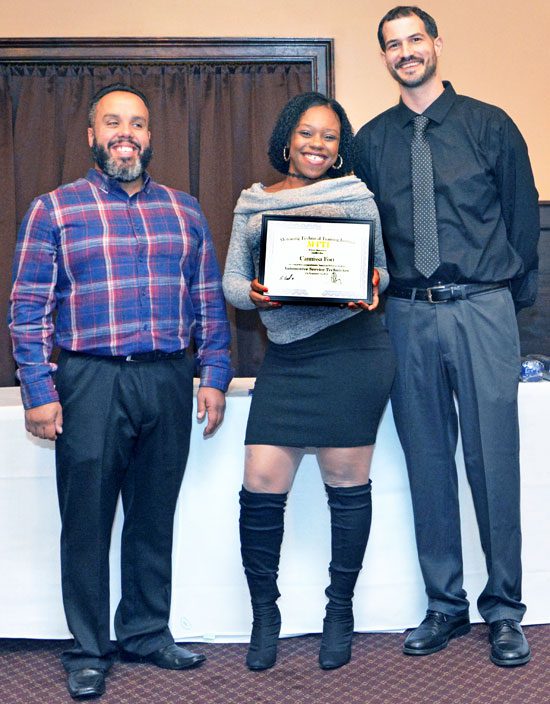 I have only good memories about being in school.

I had a good time and learned a lot. I knew when I walked in the door and met the instructors—Glen, Arturo and Rich—and staff people like Cheryl, that I had made the right decision. My classmates and I worked well together. The seven months in the program went by quickly.

Going to MTTI was the best career decision I’ve made.

The Auto Tech program was an awesome experience. The program helped me build my technical and problem solving skills—and boosted my confidence. It’s given me a great start in an industry I love.

You should love the work you do—not be bored or lack interest.

Then you will be whole-hearted in bringing your best to the job you do. If you truly want training to become an Auto Technician, I recommend you go to MTTI.